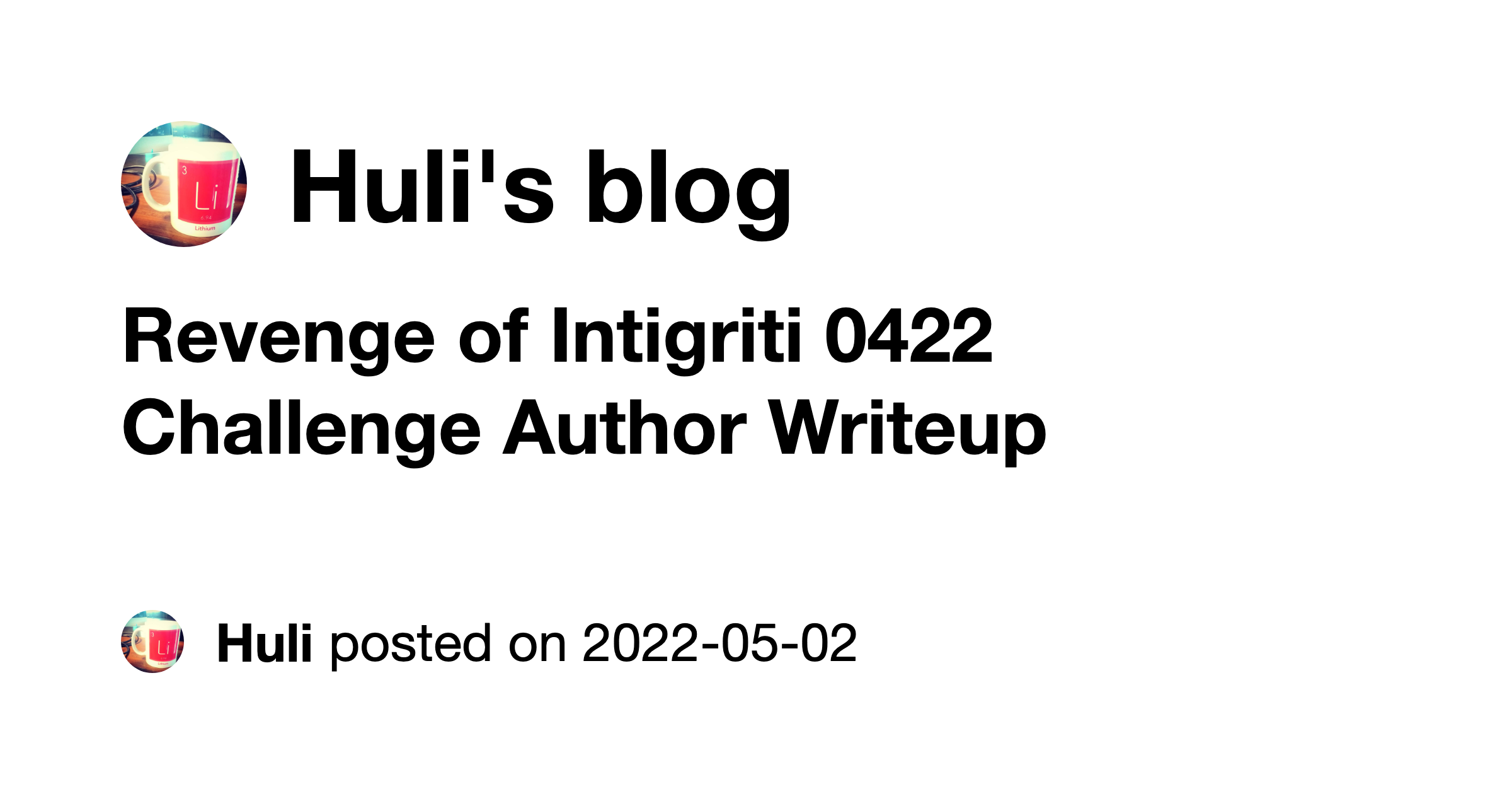 Among the many web vulnerabilities, my favorite is prototype pollution. It can be powerful sometimes when you find a script gadget.

So, I decided to make an XSS challenge about prototype pollution.

In April, the challenge I made was released on Intigriti, if you haven’t checked that one, here is the link: https://challenge-0422.intigriti.io/

Making a good challenge is hard.

I made a few mistakes. With the bugs I made, the challenge became much easier. To make up for it, I decided to make another one, called “The Revenge of Intigriti 0422 Challenge”.

Below is the intended solution to the revenge challenge.

These two steps are the same as the previous one, you can find the detail in my previous writeup: Intigriti 0422 XSS Challenge Author Writeup

Starting from step3, it’s totally different from the previous one.

For previous one, you can override document.body.innerHTML to achieve XSS. But it does not work anymore because of the patch:

What else can we do?

At second merge call, we have devSettings["root"] = document.createElement('main'), what can we do from a DOM element?

How should we find such property? For me, I will try to start with either document or window, because it’s more likely to have it.

First, we can get window object via document.querySelector('main').ownerDocument.defaultView

Object is in the protectedKeys, so we can’t just pollute ownerDocument.defaultView.Object.constructor.prototype.xxx.

It’s not a big problem, we can do a little fuzzing to find other properties to use:

On Firefox, it’s external and sidebar.

By using these properties, we can pollute Object.prototype on both Chrome and Firefox

It seesm complex, is there a simpler way? Yes!

In JavaScript, every properties has a flag called enumerable, for in can only enumerate enumerable properties. If we want to get all the properties in an object, we should use Object.getOwnPropertyNames instead.

If you see different results, it’s most likely because of the extension you have installed. For example, web3 or ethereum if you have metamask installed.

Anyway, we can use JSON to construct our payload:

After we can pollute Object.prototype, we need to find a script gadget to achieve XSS, and it’s exactly the final step of this challenge: find a prototype pollution gadget in mithril.js.

Mithril.js is not a big project, the codebase is relatively small. Although it may take some time, finding a gadget is definitely possible.

There is a type of usage that can be vulnerable to prototype pollution:

Why? Let’s see the following example:

for in also iterates the properties of Object.prototype.

So, we can start by finding such pattern.

Here is the part for setting the DOM attributes: https://github.com/MithrilJS/mithril.js/blob/v2.0.4/render/render.js#L728

The key here is that for in has been used, which means our polluted properties will be there as well.

Now, we know that we can pollute DOM attribute, so our goal is to use an inline event handler like onfocus to trigger XSS.

Keep diving in to see what setAttr does: https://github.com/MithrilJS/mithril.js/blob/v2.0.4/render/render.js#L733

If a property name starts with on, updateEvent will be called and it takes a function as parameters, no way to inject a string handler.

We can use ON instead of on to bypass this.

Another thing we need to get around is this check: hasPropertyKey(vnode, key, ns)

If this returns true, it executes vnode.dom[key] = value in the end. It’s not what we want because vnode.dom['ONCLICK'] = 'alert(1)' makes no effect.

The only way to add a inline event handler to the DOM element is to let hasPropertyKey(vnode, key, ns) failed and then run vnode.dom.setAttribute(key === "className" ? "class" : key, value), for example:

Now, our goal is to fail hasPropertyKey(vnode, key, ns) and make it returns false:

It returns false if ns is not undefined. But wait, where is this ns comes from?

Here is the code: https://github.com/MithrilJS/mithril.js/blob/v2.0.4/render/render.js#L15

It’s from vnode.attrs.xmlns, so we can pollute this attribute.

In order to not affect other functionalities, we can use the default namespace for HTML: http://www.w3.org/1999/xhtml

To piece all the puzzles together, following is a simple proof-of-concept:

As what I said in the beginning, the challenge is all about prototype pollution!

Here is what we need in the end:

Besides the above gadget, some players also find another one.

It creates a new element from nothing by polluting Object.prototype.tag. The rest part is similar with the intended gadget.

And also this cool gadget found by @lbrnli1234:

Unintended(for the previous one, not revenge challenge)

Before the original challenge has released to the public, @PinkDraconian gave early access to the other four players for private testing.

At that time, there is no sanitize function, and root is added to DOM before Mithril.js.

To my surprise, one player found an unintended solution:

It works because you can assign any value to the DOM in the merge function.

I was too focused on prototype pollution to find this unintended, thanks again to the player for finding it before the challenge was released to the public.

Also, this attack surface creates more other ways to the unintended because one can access document and window, like:

To prevent this, I added a sanitize function to filter dangerous characters, hoping to close the door for injecting arbitrary HTML.

But, as you know, I failed. So I try to fix it again and release this revenge challenge.

#2 Unintended but not fixed solution

After the patch, I found another interesting unintended solution.

Remember that we can set the value for any attributes on document?

We can set document.domain to intigriti.io and then leverage another challenge from a different subdomain!

If both subdomains set their domain to intigriti.io, they can interact with each other as if they are same-origin! See MDN docs for more detail.

For example, we can:

I talked with @PinkDraconian about this fantastic solution, we decided not to fix it and only accept the first report.

As far as I know, no one has submitted this kind of solution.

In the revenge challenge, I exclude this solution by adding a rule saying that: Should not leverage other challenges on the same domain.

By the way, it will be no longer possible from Chrome 106: https://developer.chrome.com/blog/immutable-document-domain/