Last month, I created an XSS challenge and hosted it on my GitHub: https://aszx87410.github.io/xss-challenge/notes/ 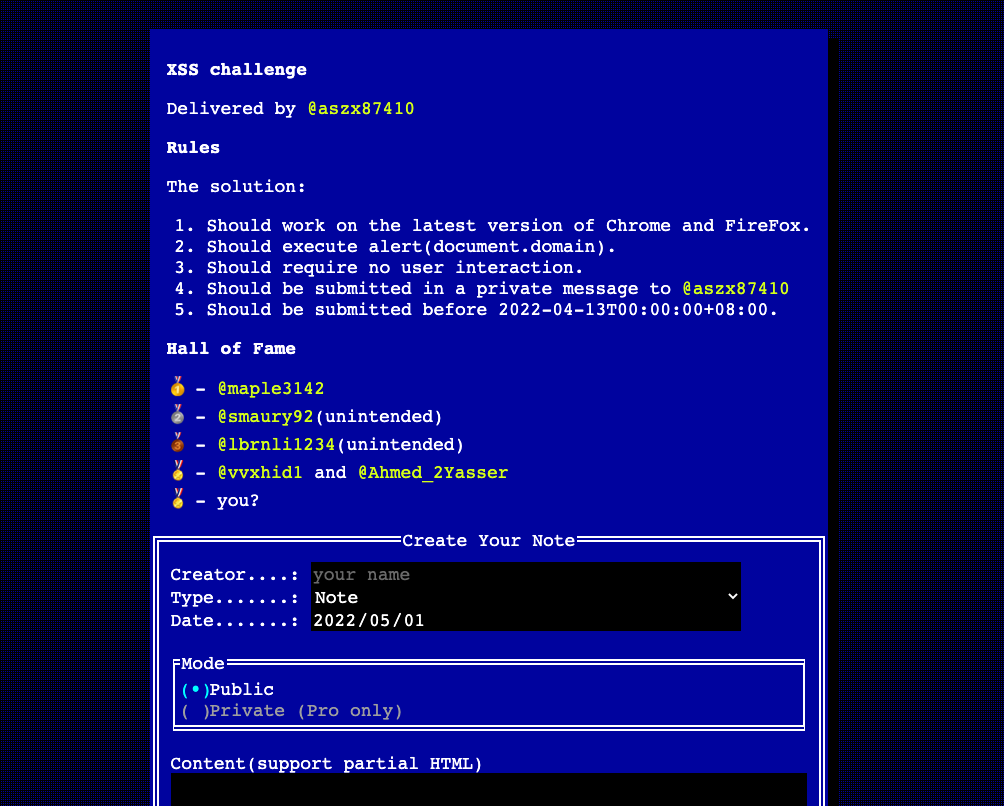 This is the writeup about the challenge and solutions, including intended and unintended.

I will start from the intended one.

Let’s look at the challenge, it’s a simple but compacted app with ~100 lines JS and not-so-strict CSP:

When the app is loaded, in loadData function, it reads data from the URL and then renders it to innerHTML after sanitized, that’s all.

For sanitizing, the config is pretty much the default one, so you can’t perform XSS directly unless you find a 0-day bypass:

What can we do by injecting a harmless HTML? Not much, unless you leverage another functionality.

reCAPTCHA to the rescue

Somehow, the challenge uses Google reCAPTCHA, and from their docs we know that we can trigger a function call by injecting the following HTML:

By providing a random wrong sitekey, reCAPTCHA will call the function in the attribute data-error-callback.

It’s important that DOMPurify allows any attributes that start with data- by default, and also both class and id are permitted.

I learned this nifty trick from TSJ CTF 2022 - web/Nim Notes, but it seems that it’s from another XSS challenge made by @terjanq in TokyoWesterns CTF 2020.

Now, we can call a function by injecting HTML. The question is, what function should we call?

Both loadScript and reloadRecaptchaScript are suspicious, but loadScript might not be a good target because we can’t control the arguments.

If we can control document.scripts[index], we can load another script from https://www.google.com.

When the reCAPTCHA calls a function, it passes no argument, so the index will be undefined, so we need to override document.scripts['undefined']

Can we control it? Sure, it’s DOM clobbering time!

Usually, we can override the attribute on document by providing a embed, form, input, object or img with name, like this:

Combining with form element, we can clobber document.scripts['undefined']:

But, it’s not working because DOMPurify prevents this behavior by default: https://github.com/cure53/DOMPurify/blob/main/src/purify.js#L1015

Fortunately, there is another vulnerability in the code:

When calling sanitize without options, the default value will be defaultOptions, so we can clobber defaultOptions.allowDOM to make SANITIZE_DOM falsy.

Also, we need to call loadData() again without any arguments to let sanitizeOptions be undefined.

To sum up, we can control document.scripts['undefined'] by providing below HTML:

Now, we have control on document.scripts[index], but we still need to bypass another check:

The src should start with https://www.google.com/recaptcha/, how to overcome this?

There is a subtle difference between element.src and element.getAttribute('src'), the former returns the formatted value, while the latter returns raw value:

By using ../, we can load any scripts from https://www.google.com.

It’s easy to find a useful gadget from JSONBee: https://www.google.com/complete/search?client=chrome&q=hello&callback=alert#1

We can’t run arbitrary JS because callback is restricted, it won’t work if you pass something like alert(document.domain), but we have the ability to call a function with controlled arguments.

The idea is simple, we can use it to load AngularJS from cdn.js by leverage the classic ..%2f trick.

Here comes the last part of the challenge. The goal is to find an AngularJS CSP bypass and XSS without user interaction.

There is a classic payload as described in:

It requires no user interaction, perfect! But there are two other issues we need to address.

First, ng-app and ng-csp will be removed by DOMPurify. Second, there is no prototype.js.

For the first issue, we can use data-ng-app and data-ng-csp instead of ng-app and ng-csp, because AngularJS will normalize attribute names, and remove x- and data- prefixes.

For the second issue, we need to know why prototype.js is needed.

The first argument of fn.call() is this, if you call this function without providing this, the default value of this is window in non-strict mode.

So, any_function.curry.call() will return this which is window, that’s why we need prototype.js.

If you look at the source code again, you can find a similar pattern:

That is to say, we can get window via "any_string".encode.call().

The full exploit including:

Here is the final payload for the intended solution:

At first, I didn’t know there was a jsonp argument in https://www.google.com/complete/search endpoint, so there was no check for jsonp.

Later on, I implemented a check for jsonp in reloadRecaptchaScript:

It turns out that I implemented a flawed check, can you spot the bug?

You can bypass the check by open redirect and double encoded the https://google.com/complete/search call, like this:

So it passed the check for reloadRecaptchaScript.

I was aware of google open redirect but I didn’t notice a subtle difference. When I tried google open redirect, it returned 200 in that case and used client side redirect: https://www.google.com/url?q=https%3A%2F%2Ftech-blog.cymetrics.io&sa=D&sntz=1&usg=AFQjCNHyq6urHn6HLwj8RP09GANAlymZug

So I thought it was impossible to leverage this open redirect.

But for some other cases, it returns 302: https://www.google.com/url?sa=t&url=http://example.org/&usg=AOvVaw1YigBkNF7L7D2x2Fl532mA

Anyway, I didn’t fix this unintended in the end because I don’t have a good solution at the moment.

Another dope unintended has been found:

It sometimes fails because of race conditions.

For example, if script at step 5 is loaded(called loadDate) before DOMPurify, we still use the latest version, so there is no way to bypass it.

The author created an HTML page and embedded a few <iframe> to load the URL many times to solve the issue.

I hope you did learn something new and enjoyed this challenge, thanks for playing the game!